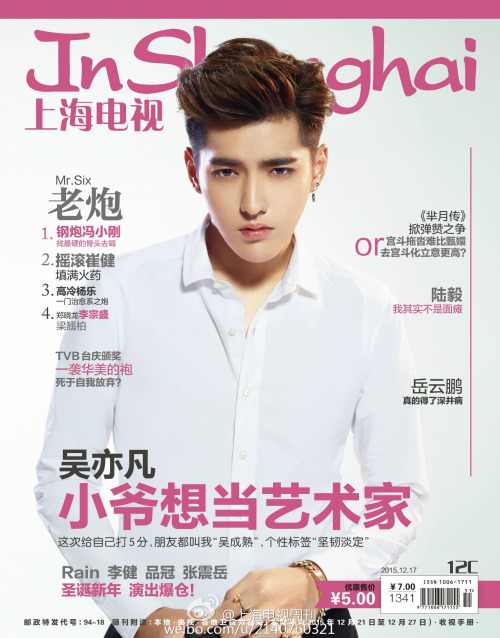 Wu Yifan: Xiao Ye Wants to Be an Artist

Kris Wu Yi Fan can clearly rely on his good looks, yet he chose to rely on his skill instead. Despite having a handsome face he chose not to act in teenage idol dramas, however choosing to shave off and dye his hair, sacrificing his appearance and even gaining weight. This time in <Mr Six> he plays the role of bloodthirsty and ruthless Xiao Fei, once again causing countless young girls to fall for this manly guy. But Wu Yi Fan has spoken out saying, I’m not an idol, I want to become a skilled artiste who is calm, steady and just a little handsome.

In Mr Six you play the role of Xiao Fei, what do you think is the hardest challenge? What kind of personality do you think Xiao Fei has?
Xiao Fei is a very outstanding character, he’s not a typical bad guy but instead a kid who’s a little rebellious but aware of his own emotions. On the outside he appears to be cool and out of control but on the inside he’s a simple minded youth. He has always liked the satisfaction of repaying gratitude and revenge in Wuxia novels, hence when he saw Lao Pao Er, he had complex and conflicted feelings of admiration yet animosity. Therefore to me it is a huge challenge to interpret this role.

Were you nervous when you acted with Feng Xiaogang?
I was definitely nervous. Feng Xiaogang has always been a senior whom I admire, to be able to act with him is a great honor. As a senior, he has constantly given me acting advice, and off camera he takes care of me really well, I’m very thankful that he and the other mentors share their acting experiences generously without holding back. Also, Feng Xiaogang has a very “Lao Pao Er” aura, whoever is acting with him can always be quelled by it.

Feng Xiaogang said that you’re someone who is attentive and considerate towards others. It’s easier said than done, so how do you go about doing it?
I feel that it’s a form of respect towards elders and seniors, it’s hard if it’s not present.

For many others, they require a lot of time to progress from having a walk-on role to having lines, but when you began you were already the leading character, have you ever felt that you are very lucky? At the same time do you feel pressured? Were you ever worried that you will not be able to handle it?
I feel that I’m a very lucky person, when I started I already had very excellent seniors to aid and guide me. There will definitely be pressure, because they are all very professional, greatly experienced seniors, but it is only in this way that I would continue to improve myself, continue learning from them and assimilate the information, right now I am still in the process of learning, I believe that a disciple owes his accomplishments to his mentor.

How many points would you give yourself for your acting?  (Out of 10)
5 points, it’s a score that passes. Because in comparison to these seniors, I’m just a beginner, I’ve passed only because of their tutelage, that I could work hard to interpret the role of Xiao Fei, but it’s only 5 points because the acting skills of these seniors are far too brilliant, and I feel that if I were to act again, I would definitely portray it better.

This time you are working amongst many other men. How is it different compared to acting with women before?
More common topics, during break times I can play basketball, video games and such. Mr Six is a movie about men, so when a group of guys are together, that kind of spirit is present.

After working with Tsui Hark, Guan Hu, Stephen Chow, Guo Jingming, Xu Jinglei etc, who do you get along well with the most? Do you look forward to working with any directors?
These directors have taken care of me very well, and have generously shared many experiences without holding back. I’m someone who really likes to try new things, so I’m looking forward to all kinds of roles in the future, I hope to work with all kinds of directors.

Director Guan Hu’s works are mainly about steel-willed men, and previously the image of yourself which you showed to everyone was that of a sunny boy, this time how did Director bring about that kind of inner bloodthirst? Does Director Guan Hu have a steel-willed personality?
This is a brand new experience for me, it’s my first time acting the role of an antagonist. Director Guan gave me many acting pointers, for example expressions of the eyes and actions, on set we never stopped communicating, he taught me how to interpret the very vivid Xiao Fei realistically from a different perspective. Director Guan is a fully typical steel-willed Beijing man.

After seeing the movie screen captures and promotional pictures, we realized that Xiao Fei has an extremely cool silver hairstyle, did you use a wig? During the ending scene at the glacial lake in the promotional clip, Xiao Fei’s hair returned to black again, why is that so?
That was my real hair, I didn’t use a wig. At that time, in order to make it more realistic, I bleached my hair white in order to get into the character better. Later on I dyed my white hair black, this color transition to black is due to a crucial turning point in the movie.

<Challengers Union> is a new challenge for you, as an idol the image you give off to others is rather cold, did you choose to participate in a reality show to get rid of your idol image?
No, it’s because I actually do not have an idol “packaging”, I’ve always felt that I’m not an idol, compared to this term (“idol”) I would rather hope that I would be able to prove my skill through my hard work and be recognized as an artiste by everyone.

In this program you really let loose, did you see the program? Will you regret being so open, losing your idol image?
No I won’t, like I’ve said before, I have no idol “packaging”, I don’t feel that I am an idol either, the most important thing is to bring happiness to everyone in the program.

In the future will you try out other types of reality programs? If yes, what kind of programs will you be interested in?
Yes, I really like trying things out. I would like to try sports themed programs because I have always liked playing basketball.