Q: Do you have complex about your appearances personally?
Chen: I have a beauty mark on my eyebrow. This is the first time i’m saying this. It looks like an blemish but it’s actually a beauty mark. I don’t really like the beauty mark that’s on the eyebrow.
Baekhyun: My [complex] is dark circle? In the early stages of debut, i didn’t have any, but i got them while promoting. I was pretty confident about my ‘bare face’ before.
Chanyeol: Mine is that my face gets puffy in the morning. It gets 3 times puffier. It’s worse because I have rhinitis.
Kai: My face gets puffy too.
CHANYEOL: Don’t you have rhinitis as well?
KAI: it’s not that. (laughs)
BAEKHYUN: I think Luhan hyung has no complex.
LUHAN: No, I do. My nose?
CHANYEOL: What the…
KAI: I have that one too. My nose appears crooked. But it’s okay nowadays.
CHEN: I have another one! Double tooth. It’s such a pity. If I didn’t have this one thing, I will have really healthy teeth.
XIUMIN: Having a short neck and short arms. My upper body is a little short.
LUHAN: Ah, i thought of one. The scar beneath my lips.
BAEKHYUN: Let’s pass something that can be covered by makeup. (laughs)
LAY: Mine is having a big face. My legs are a little short too. Also my forehead.
D.O.: Mine is having narrow shoulders. (laughs) I don’t have any complex about my face, but my narrow shoulders are a worry.
BAEKHYUN: But even though D.O. has narrow shoulders, he’s really strong within our team. His nickname is ‘Fedor’. Ice fist.
CHANYEOL: His nickname is ‘geodude’ from pocket monster.
SUHO: I don’t have one… particularly.
SEHUN: Mine is my smiling face. I’m really smiley, but my smiling face is not pretty.
TAO: I don’t have one particularly as well but… i’m conscious of the the pimple on my forehead. So i try not to bring down my fringe.

Q: EXO has a lot of noona fans. How about we give hopes? What’s the possible age difference for younger and older female [dating wise]?
Chanyeol: 40 years?
Baekhyun: You have to keep your word?
Chen: We’ll see in the future.
Baekhyun: So the most important thing other than age is the face value (laughs). Anyways, i’m [okay with any age] as long as our mind matches. As long as we don’t look like mother and son when together, it’s okay.
Chen: 5 years younger and older for me.
Kai: 12 years difference? But not younger than me. We’re in our 20’s so meeting someone in elementary is a little…
Lay: I like someone younger than me. Older is okay as long as there isn’t a big age difference.
D.O.: I don’t care about age. Just not grandmother or an infant.
Luhan: Me too.
Xiumin: I don’t really care either.
Suho: 8 year age difference for me.
Sehun: I like noona. Up to 4 years older than me.
Chanyeol: Who is it? (laughs)
Tao: 3 years age difference for me?
Chanyeol: You like a 3 year old?
Chen: Do you like an infant? (laughs)
Tao: 3 years younger or older than me.

Q: I’ve seen your ideal types on other interviews a lot. What are types you personally don’t like?
Lay: Rude people.
Baekhyun: Females who swear are also a little off-putting.
Chen: Ah yes. It’s a turn-off when a female swears.

EXO ON FANS AT AIRPORT:
Suddenly, Lay confessed his inner feelings about airport. He said that the fans’ cameras are overwhelming.
Lay: They followed us right to the front of the toilet and took photos. I was so surprised. They took photos while we were talking inside the toilet. It was so scary.
Baekhyun: I think following us to the front of the toilet is a bit wrong. I want something like EMP, so with one button, everything can be turned off.
Chanyeol: cellphones will be turned off as well? (laughs)
Lay: They don’t look around because they’re taking photos. Once, this fan at the airport bumped into a passing child while taking photo and the child fell over. I was angry.
Chanyeol: Because they all follow us, it’s really dangerous. There are times when injuries occur.
Kai: I want to say let’s be careful at airports.
Baekhyun: It would be nice if there was a ‘photo zone’ at the airport, so we make them takes photos only there.
Chanyeol: That’s correct.
Chen: Stare right, middle, left, well done~ and we leave.
Chanyeol: Should we send a request to Incheon Airport?

Twelve boys who came from a planet outside the earth. The boys appeared after a year with hoods covering them with ‘Wolf’ making girls’ hearts flutter and are now ‘Growl’ing at another wolf coveting their girl. It was only a matter of time for them to steal 700,000 girl’s hearts. We met with EXO, who set a new album sale record in 12 years and grabbed 13 first place trophies from various music programs, ending promotions splendidly.

Sadly, because ‘aliens’ also have to renew their passports to work in South Korea, EXO-M’s leader Kris’s place was left empty. Along with this, when asked one question, the unprecedented eleven answers that came out from the number of people composed the interview.

Q. How do you feel about ending promotions?
Suho: We promoted for three months and received more love than we thought we would so I am only thankful. We will come back with better music and a cooler performance in our next album.

Q. You guys came back after one year of inactivity. Aren’t you scared of future periods of inactivity?
Suho: In the future?
Chen: We aren’t scared at all.
Baekhyun: I think that an inactivity period is something that can be developed in the future.
Chen: Since we had time among ourselves to develop I think that the results were good this time. So we aren’t scared and think of it as a change for us to grow more.

Q. Your popularity is huge. How do you feel about it?
Chen: Personally it hasn’t really hit me yet. However, when I go to exercise and passing by ahjumma’s ask if we are by chance EXO and recognize us, I do feel it.

Q. Don’t the Chinese members feel sad that they are only promoting in Korea?
Chen: It will be very sad.
Tao: We couldn’t promote much in China but because I am with the hyungs in Korea I’m pleased and I’m happy.
Baekhyun: The Chinese fans monitor us and give us a lot of interest.
Chanyeol: It is actually us who feel more sad. Because we can’t go to China a lot.
Chen: We are going to China now. With Growl. Anticipate it a lot Chinese fans.

Q. Your super power concept. How were your reactions, personally or those of a friend or family member?
Chanyeol: Honestly, we weren’t embarrassed. When I first saw the concept while saying ‘Wow! We really are cool!’ I liked it. We really seem mysterious. My parents also said that it was cool but my noona was a bit embarrassed. Hahaha.
Suho: This time, we went out on many variety shows and we became the characters of our super powers. It was nice.
Chanyeol: Yeah. And even those who see us for the first time and don’t know our names recognize us and say “He’s first!” “He’s water!” What do you think teleportation?
Kai: Me? Why suddenly… I like it. (Kai is set up as the teleportation super power.)

Q. It’s Chuseok (t/n: a very important Korean holiday somewhat equivalent to Thanksgiving). Are you meeting your family?
Baekhyun: We will rest for the day.
Chanyeol: Finally!
Chen: We had a photo shoot overseas. So in return, we filmed a lot of Chuseok specials and are going to rest, watching with our families.

Even ‘aliens’ the same want to spend Chuseok together with their family.

EXO’s album caught a lot of attention throughout promotions. With one album, many music videos were made. Even the music video’s appearances were varied. With ‘Growl’ that became the main, a one take music video was made as well as a drama music video using songs included in the album. We are especially curious of the starring member’s acting stories.

Q. The drama version music video. It was released a number of days ago. Starring members Kai and Luhan’s feelings?
Luhan: It was hard. Really…
Kai: This wasn’t something that we learned separately and went into do, we did it on the spot. There was a script but it was just the situation, we had to do everything and match with that situation. It was very hard.
Chanyeol: As soon as we arrived, they ordered them to do a kiss.
Kai: Hahahaha.
Chanyeol: As soon as we arrived at the shooting site, even before greeting the female actress they said “Kai, kiss her!” and replied “Yes!” and went and did it.
Baekhyun: Kai-sshi did that acting the best.
Chanyeol: He made many NGs (t/n: bloopers) too. (Laughs)

Q. But where did the kiss scene disappear to?
Chanyeol: It only came out in the teaser.
Kai: It comes out in the teaser.
Chen: We had an enthusiastic performance also. Saying “Yeah~!” “Wah~”. It was cut. We put a lot of effort in the acting.
Chanyeol: I come out once being tired in the second part.
Chen: I didn’t appear even to the very end.
Lay: We really put a lot of effort in yamakashi (free running: jumping between two building towers or without using anything, just your body, climbing up etc., a new type of sport that requires advanced techniques), but one cut didn’t even come out.

Q. Do the other members not have any complaints about screen time?
Chen: We definitely don’t.
Baekhyun: We liked it. Really. (Everyone: Yeah! We liked it! We didn’t have any burdens!)
Chanyeol: We are thankful to Luhan hyung and Kai.
Baekhyun: My cheekbones hurt too much. I can’t laugh anymore.
Kai: Anyways, I thought that I definitely had to learn how to act. I do’nt know much about acting so it became a burden.
Luhan: Acting without a script was the hardest. Gestures, facial expressions, acting, the situation and everything…

Q. Do the EXO members have any greed for acting if given the opportunity?
Kai: I don’t know about the far future when I learn more acting and become better but right now I have no greed.
Chanyeol: If given the opportunity, I think I can do anything.
Baekhyun: I think it would be good to show a perfected acting next time.
Suho: It’s because what’s important to us right now is our music.

In the harmonious mood, laughter exploded. The eleven member’s treasuring hearts towards each other stood out in the peaceful mood that they made. (t/n: Kris was not present for this interview, which is why the reporter only mentions eleven members) 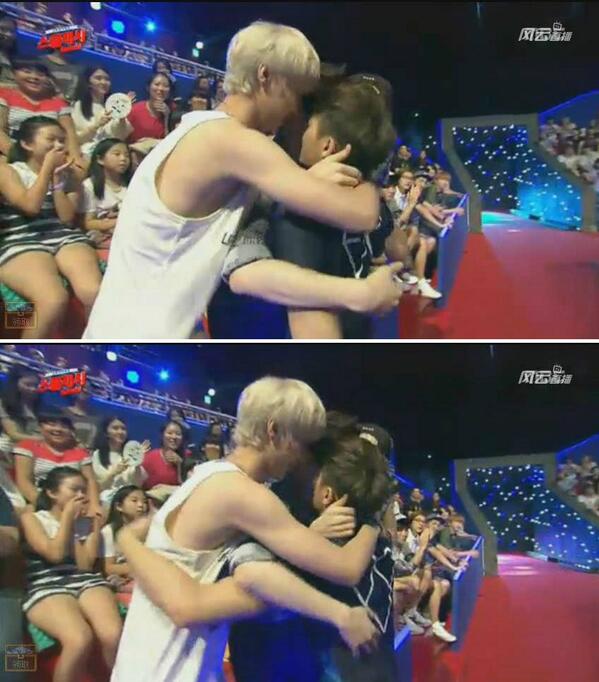