“I am selling the underwear of Do Kyung Soo (D.O). I personally got it from their dorm. It was extremely hard for me to obtain. I am thinking it’s worth 10,000 won (~ $10 USD). You don’t believe me? There were a couple of hair strands on the underwear that you could test for DNA. I also have socks. Do not argue or tackle one another. I’m going to go next week to get Sehun’s underwear if you want to reserve it. I could not get through EXO-M’s thorough security. This item was something I was able to barely obtain. I’m selling hair strands, too.”

*To everyone’s disbelief, she claimed they were the real brief boxers of EXO-K’S D.O, which she stole herself from their dormitory, and that she was selling them for around 100,000 KRW (roughly $94 USD).

She also explained that there were several strains of hair on the boxers, and that disbelievers could get the DNA checked for themselves.

She also added that she stole some socks and will be selling hair she picked up at their house. She had attempted EXO-M’s dormitory also, but claimed that the security there was too tough, so she couldn’t manage to break in.

Not only does she stop there, she further added that she was going to visit their dormitory again next week and attempt to take Sehun’s briefs also, and that she was accepting reservations for the item in advance.

Hello. This is EXO’s D.O.
I am truly thankful to all of you for congratulating me on my 22nd birthday and for always making me happy.
But I want to make you all even happier.
Please look forward to it.
trans cr: fy-exo

Hello. It’s EXO’s Kai.
I’m pretty late again, right? What are you doing now instead of sleeping?
Kai was reading everyone’s birthday letters, and when I looked up it was already 4 am. Continually reading all these letters warms my heart, and I am very thankful.
Unfortunately, I couldn’t spend my birthday with fans this year, but being able to meet our fans during our schedules made me happy.
Everyone sang Happy Birthday and within such a short period of time, there were some who confessed their love and read their letters to me. Because of this, I didn’t realize how much time had passed. In addition, we attended a very fun movie premiere in the evening!!
January 14th was a cold winter day, but due to our fans, it seemed like a warm spring day. Similar to how I felt the warmth from our fans, I hope I, too, am a warm light for you.
Ever since the teaser days up until now, the points at which you started liking me may differ, but I believe the times we will get to spend together in the future will be the same. As we get to know each other, for the next 10 and 20 years, let’s like and appreciate each other just as we did from the beginning. Us…!!
Up until now, this has been Kai, one of the happiest people in the world~

P.S. Today, even though it was very cold, fans still came despite the weather. Though there were some people who couldn’t come, thank you all so much. Please stay warm.
trans cr: Nana

END_OF_DOCUMENT_TOKEN_TO_BE_REPLACED 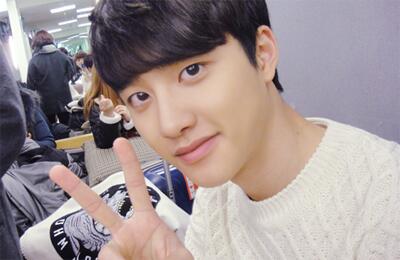 Hello. This is D.O. from EXO.
Thank you very much for giving us such a big love in 2013.
I just successfully finished performing at the MBC Gayo Daejaejun.
How do you think EXO did in 2013?
Count on us in 2014 as well.
I wish you a happy new year, and I hope everyone’s 2014 will be full of happiness and good. Thank you.
cr: Planet EXO

Credits: babylion | do not modify. do not re-upload.