Hello, this is EXO’s Baekhyun. From being BaekDo MCs, I became an Inkigayo MC. I’m really nervous right now! Hehe I will show everyone a hardworking side. Please anticipate and support us! Fighting!credit

This is EXO’s guardian, Suho.Everyone, hello~~
Baekhyun and I became the new Inkigayo MCs!!

We have wanted to be MCs for such a long time.

We will do our best!! Please support us~~!!
We have also prepared a surprising special stage. Hahahehehoho 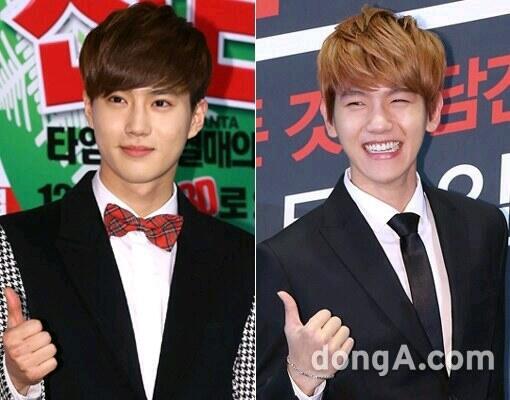 [Sports DongA] Idol group EXO Suho, Baekhyun have been chosen as new ‘Inkigayo’ MCs
On the 24th, SBS representatives have revealed, “Lee Yubi and EXO Suho, Baekhyun have been chosen as the new ‘Inkigayo’ MCs and will be joining original MC Kwanghee. After Lee Hyunwoo and Girl’s Day Minah step down, ‘Inkigayo’ will continue with four members.
Lee Yoobi will be joining starting Feb 2nd and EXO Suho and Baekhyun will be starting on the 16th
translation credit : here

[NATE] EXO Suho and Baekhyun has been selected as new MCs to host Inkigayo along with actress, Lee Yubi.

On the 24th, according to SBS, Lee Yubi with EXO’s Suho and Baekhyun has been selected to be new MCs for Inkigayo, together with Kwanghee to form a 4 emcees setup.

EXO has received the praise of being the current trend among idols and has swept away grand awards at awards ceremony. Among them, Suho and Baekhyun rises as the top in terms of variety and is known to have received love calls from variety themselves.

In the future, you can look forward to a lot of spectacular performances as ‘Inkigayo’ will present to you with collaborations and cameos on stage with numerous singers and charming MCs.

In addition, due to overseas schedule, Suho and Baekhyun will only take on the MC role after 16th of February.