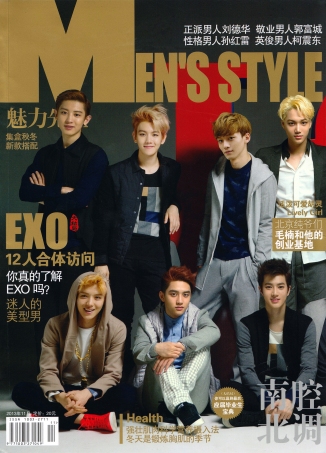 END_OF_DOCUMENT_TOKEN_TO_BE_REPLACED

EXO
They’re not merely legends.Even though EXO are already popular all over Asia, they’re still not as widely known as the Chinese idols! But don’t worry, they’re only around 20 years old plus they have a few, extremely charming Chinese members – if we say that distance gives rise to beauty, the Korean members have given the Chinese fans endless dreams and a feeling of mystery… And, the Chinese members have undoubtedly allowed Chinese fans to believe in them even more – they’re responsible for affinity…
Through this photoshoot, the staff sincerely felt their charisma is not limited to them only being on stage but from now on, in the clothing world, the fashion circle, movies, dramas, shows…….There are so many places that they could develop in. All of this makes people continuously look forward to their future.
EXO are not merely a legend!
They are the most perfect beings!
They have the most fierce future!
They will slowly enter every single industry!
Because work is busy, we are currently working hard to complete our EXO interview, plus after that there will be many more tasks to do, so regrettably, we will have to wait for the next issue to see you again for the exclusive interview.
For the interview this time, our editing staff have completed their tasks. They have prepared just about a week’s schedule – we have got to know each and every one of the group members distinctly, we will do our best not to ask them anything they’ve been asked before and use questions in which everyone is interested in, so that we can give everyone an even truer, more in depth EXO!
Everyone please do look forward to it!

TAO
This big boy with a tall stature is without a doubt, TAO. As someone who has practiced 11 years of martial arts, his sporty style is obvious. He is a boy who is both manly and seductive, an angel who is cold yet gentle.

KRIS
During the gaps of the photoshoot, KRIS would come over and tell us about his deep interest in designing clothing, and excitedly discussed with our fashion editor about the clothing this time… … If one day, you see a fashion label by KRIS, you probably would not be surprised!

BAEKHYUN
Hi I’m BAEKHYUN!
When this sincere line sounds, it makes people uncontrollably think of all the stories about him… … BAEKHYUN is someone who has always been able to give people a piece of silent goodness, even when he is at his happiest, his smile is still graceful.

CHANYEOL
CHANYEOL, makes people who can’t help it but link him to certain, friendly characters in story books. This has led to feeling a natural sense of closeness when you first meet him… … In reality, CHANYEOL can be considered one of the cutest members… …

SEHUN
SEHUN, a boy who exudes the air of a noble… … As EXO’s youngest member, everyone will find his every action and expression, a cute kind of pride, even when he is tremendously cold, you will still find that this is just another cute act……

LU HAN
LUHAN, this eye-catching Beijing boy, even though he is very quiet and gentle here, he is still a bright star. Simply from his warm, smiling face and cute bow we can understand why he receives so much attention….. why he makes many people reluctant to part with him.

KAI
A domineering dance posture and his little wheat-coloured skin leave a heavy impression, as well as his contrasting, youthful maturity and sexiness. But still, he is a shy young man who can also act cute. When facing compliments and praise, he will use a bright and clear laugh to hide his shy self.

CHEN
The perfect lead singer on stage, Chen, is a very energetic young man in his private life. In particular when he’s with Chanyeol and Baekhyun, the atmosphere becomes explosively high! Seeing Chen who has such a cute face, the people beside him can’t help but feel extremely happy under his influence.

SUHO
Because of EXO,it was the first time our editors knew of the phrase ‘to be in charge of’, so this time, our editors decided that we would use it for the first time here -that SUHO is most definitely ‘in-charge of smiles’ in EXO -no matter when you look at him, you will always see his smile that is as warm as the sun, graceful, polite and well mannered -there isn’t any air of a leader about him. Perhaps it’s his gentleness and kindness that has allowed him to become a leader that is protected and loved by everyone.

LAY
After going through professional training in Korea, LAY no longer holds a Changsha countryside air around him. The him with many skills and talents had an exceptional disposition during the photoshoot……Of course, what was most unforgettable was still his bashful smile and his dimples……

D.O.
D.O. who looks even more like the ‘maknae’ may present himself ‘maturely’ because he doesn’t wish for other people to say that he is small -he looks very cute, but his speech and actions make people feel a unique sense of manly charisma. D.O. is a very good kid, using his own words, he is ‘the kind of person who quietly observes’, when the members are playing around, he is always silently looking on from a side, and then laughing along with everyone.

XIUMIN
When looking at him at the photoshoot, XIUMIN looks like an outgoing person who likes to smile, but he does not like to talk, and has the feel of a lone ranger, he is also a little shy, and is calm no matter the situation…… 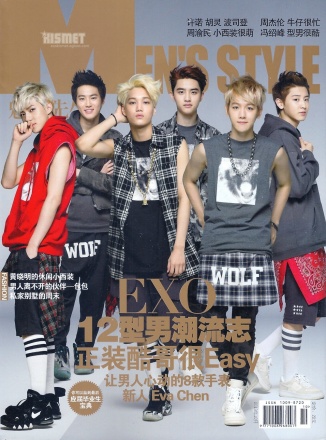 END_OF_DOCUMENT_TOKEN_TO_BE_REPLACED

If you do not know EXO, then I will heartlessly tell you: You’re old already!

Over a million comments on an article, even  weibo queen Tao Chen and many other big celebrities have taken the initiative to ask for others to share information about EXO with them, fans whose screams were actually able to make Zhang Han (t/n: a very famous Chinese actor) angry. EXO, a new Korean idol group like this that has only debuted for a year, why are they so hot?

-Because they represent Korea and even Asia’s newest trend!

-Because they represent brand new dreams and aspirations of the new people!

-Because they represent this world’s most beautiful and first aspiration!

This time, just as when we agreed to shoot EXO for this issue’s Men’s Style cover page, our editors became young in just a second, and happily shouted and skipped as we arrived in Korea’s capital city. Although the process of preparing was extremely hard, but just thinking about needing to prepare 5 outfits for each of the 12 members in just a few days, which in total is 60 outfits, our head starts to ache.  This lead to us having overweight baggage despite having first class tickets to Korea, at the end it was only because the staff saw that it was for the photo shoot with EXO that they let us go. When we arrived in Korea, we were stopped by the custom officers because they mistakenly thought that we had smuggled the clothing from abroad. Finally, after confirming that we were indeed reporters heading to hold a photo shoot with EXO, did the officers comfortably let us go.

Perhaps it is because they are too popular, due to their consecutive schedules, it was only at 2pm of the day itself did the photo shoot begin. All of EXO’s members only had 2 hours of sleep, when they and the staff rushed over to the photo shoot venue like strong gust of wind, all of them had not even taken their lunch. Us reporters were unable to hold it in, and very immorally, began to worry about the quality of the photo shoot. What was good, was that the reporters had predicted this and prepared them lunch in advance, thankfully the SM staff in Korea were very nice, and there none of the rumours of ‘Koreans being hard to handle’ were realized. Perhaps, that ‘being hard to handle’ was just people from China not fully adapting to the strict and professional working attitude! Finally, because of the 12 members of EXO’s professional attitude and rapport, the group of Korean photographers’ hard work and EXO’s managers huge assistance, we were actually able to finish the photo shoot half an hour in advance!

At the photo shoot venue, each and every member of EXO was extremely handsome, definitely even more handsome than on TV or in magazines. It was precisely because of this that us, reporters, started to feel immense pressure –this time we must definitely photograph them to look more handsome than they do in real life, only then will it be considered a success!

EXO is undoubtedly a group of well-trained artistes that have gone through training from a big international company. Not only are they polite, they are professional and have good work ethic. At the venue, we saw that the 12 of them had very good relationships, they are Asia’s idols, but actually they too are just a group of boys next door –when it wasn’t their turn, the members who would want to take a nap, took a nap; those that wanted to play games would play games; those who wanted to use their mobile phones, used their mobile phones; those who wanted to play around, played around –they were very young, lively and cute.

And what left the deepest impression with our reporters was that Luhan and Sehun’s relationship was so close that it would make one jealous –when Sehun would finish trying out a set of clothes and would face the mirror and do a catwalk and make a few poses while looking pleased, Luhan would smile and not be able to control himself and up to Sehun and peel off his clothes to wear on his own, and exaggeratedly imitate Sehun’s poses from before, causing Sehun and all the staff present to laugh till they couldn’t close their mouths –that kind of an intimate scene is just way too fresh and good, it was stuck in our reporters’ heads for days and could not be erased.

In our next issue, EXO-K will appear on the cover of our magazine. Once again, the twelve members will appear, with brand new outfits and an attractive photo spread, don’t miss out!

Nationality: Korea
Height: 173cm
Nicknames: Mantou (Bun), Kim Baozi, Baozi, Cute bun (Calls himself this), MINMIN, Jiaozi (Cause he became skinnier by a lot), Da Ge, Bao Bao Da Ren (Lord Bun Bun), Little Squirrel
Responsibilities in the team: M second main vocal, second lead dancer, in charge of screaming
Talents: Singing, Taekwondo, Swordmanship, dance, Soccer etc.
Favorite artistes: JJ Lin, Jay Chou
Ideal Type: 眼缘/Yan Yuan is very important (T/N: Seeing a person for the first time and getting attracted to him or her). A girl that can hug and take care of me, and give me comfort/console me when we are dating (When I see a person I like I will immediately confess to her)
Pre-debut Experiences: 2008 SM Everysing Contest Runnerup