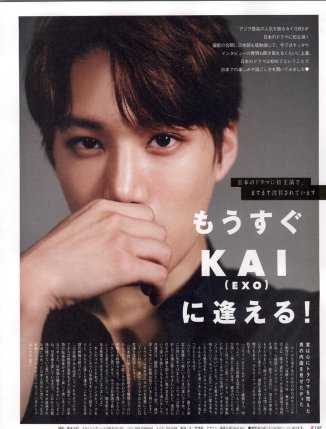 As a Matter of Fact, I Wanted to Show the Inside of a Man who Holds Trauma in His Heart
KAI stars in WOWOW original drama series “Spring Has Come.” He plays Lee Jiwon, a Korean photographer who the heroine, Naoko (Kurashina Kana), meets by chance at her workplace. Jiwon, who meets Naoko and soon gets on a good terms with her family, is a young man who is kind and full of passion but also has complicated circumstances. So we asked KAI to analyze this man, Jiwon.
“Jiwon is a very kind and delicate person. I believe he is someone who cares about deepening the relationships he has with others, more than anyone else. I believe that his charm comes from him wanting to know more about Naoko and having heartfelt consideration towards her family as well. But actually, he has trauma and there are some dangerous aspects to him as well. He is a character with various charms.”
Was there anything to be careful of while acting out Jiwon?
“I was particularly careful of the difference between when Jiwon is alone and when he is with Naoko and her family. Although Jiwon is considerate of others, because his heart is scarred by something that no one else knows about, I had to make sure to act in a way where the audience can feel this difference. Our commonality is that we’re Korean (laughs). I think that him having strong feelings and his kind personality is similar too.
In the drama, you performed your Japanese lines nicely but it seems like you actually studied intensively for the sake of this role.
“I have been studying Japanese for a while but I was able to study plentifully, thanks to filming this drama. I think I’ve improved considerably. Now, I can say I what I want to say in Japanese and I’m able to understand it more to some extent as well.”
Your comments and you speaking in Japanese throughout the interview, does show that improved considerably. Do you still want to continue studying Japanese?
“Since I became able to speak Japanese to a certain extent, my motivation for studying has grown stronger and is more enjoyable. Japanese sounds cute too, right? Because I love Japanese, I will continue my studies. By the time the drama broadcasts, I guess I will be speaking fluent Japanese like a native. (laughs).

With their razor sharp pop songs, complex mythology, and preternatural good looks, EXO have dominated the Korean charts – and since the implosion of Harry Styles et al they’ve become the biggest boyband in the world

No one does boybands like South Korea, and no one does fandoms like K-Pop. When nine almost preternaturally good-looking young men, all skilled singers and dancers, tear up the stage in stadiums roughly the size of a small city, spare a thought for the teenage hearts promptly slain. This is EXO. And, since the implosion of One Direction, they’re the biggest boyband in the world.

END_OF_DOCUMENT_TOKEN_TO_BE_REPLACED

As soon as you see the March issue, you might have questions like “Tang Wei and EXO?” “But why just Baekhyun, Tao and Sehun are featured?” is what many readers may wonder. This is the process of the collaboration shoot between Tang Wei and EXO for <The Celebrity>. In an effort to target all Asian audiences, having one of Asia’s greatest celebrity actresses, Tang Wei as the cover model was, of course, our first choice. After many months of sending many ‘love calls’ to her agency and acquaintances to allow her to be featured in this month’s magazine, Tang Wei finally gave an ‘OK!’ to us.

In 2013, the globally acknowledged Korean group EXO emerged from Asia’s music industry, whom <The Celebrity> has been eager to capture stories on. We wanted to feature them in more issues than just the previous two. Though the collaboration with Tang Wei seemed difficult, with global group EXO, this concept for The Celebrity seemed more appealing. Now, we see the best actress and best K-pop stars collaborate and create an even better combination.

The editorial was under its way. We had several discussions in regards to this project with EXO’s management company and after some struggles, we managed to gain a pleasant reply from EXO. But that was not the end. Due to the organization and planning of Tang Wei’s 24-hours-a-day schedules and overseas commute, the work to match both Tang Wei and EXO’s busy schedules was not easy. More than one hundred e-mails and a dozen calls were exchanged per day. Then came the issue of which of the twelve members would be paired with Tang Wei and featured in this month’s issue. First, the members’ schedules were compared in order to see which matched Tang Wei’s. Second, which member looked best when standing next to Tang Wei? Keeping those factors in mind, as well as the issue of communication, the best candidates seemed to be EXO-M’s Tao, who secured his spot from the beginning, as he is able to communicate well with Tang Wei. EXO-K’s Sehun who looked like he could, together with Tao, stood next to Tang Wei confidently. Also because EXO-K’s Baekhyun has the persona of an actor,was finally added to the group. (It was later known that Tang Wei’s favorite Korean group is EXO).

Right until the day of shooting, the editorial team worked busily day and night. Then, it was finally the day of the shoot. As Tang Wei and EXO’s Baekhyun, Tao, and Sehun stood before the camera, the staff’s urge to applaud was just too great.

(to be continued.)+ EXO & Tang Wei’s cover story will be broken up into three parts. More will be featured in the March issue of . Please look forward. 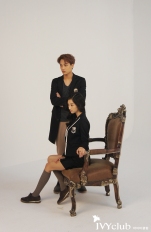 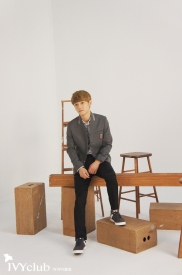 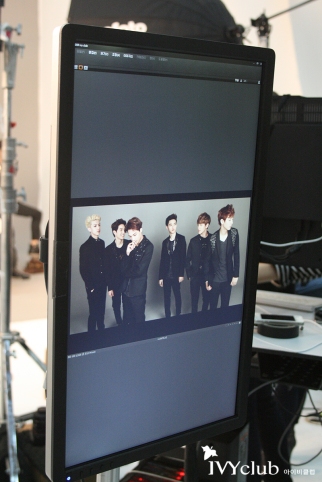