As of today, July 21, Wu Yifan (Kris) and Luhan’s contractual dispute with former agency SM Entertainment has drawn to a close.  END_OF_DOCUMENT_TOKEN_TO_BE_REPLACED

SM Entertainment has announced that it has filed a formal lawsuit against former EXO member Kris (Wu Yi Fan) for contract violation.

Now SM has filed a similar lawsuit against Kris, the companies that contracted him as their endorsement model, and the movie production companies that casted him for their projects. It argues that all of Kris’ professional activities in China are illegal and were obtained using the popularity he earned while he was with EXO. His action caused serious conflicts and financial damage to contracts that EXO was involved in Korea and elsewhere, SM argues, and they are demanding that he take responsibility.SM Entertainment announced today, July 31 KST, that their lawsuits against Kris and others related were officially drawn up in Beijing courts yesterday, July 30.

SM Entertainment has announced they will begin seeking legal action against those who are spreading false information regarding Kris’ leaving EXO.

They also urge sasaengs, fans and netizens to stop harassing EXO members through online media. Furthermore, SM asks not to believe untrusted sources and to wait for the responsible sides’ explanation.

Before, there were rumours about Kris’ reason of nullifying his contract.

Kris’s law firm, Hankyul, released an interview through Chinese media, Sina, and said the reason of his lawsuit wass no other than requesting equal treatment and for his ambitions as an artist to be considered. They also said, “Kris received several movie and drama role proposals, but they were all refused by SM Entertainment.”

Since the news about the termination of Kris’ exclusive contract broke out, many false rumors and personal attacks on the EXO members and the company have been circulating online, and we will be responding to those with legal actions. The EXO members are struggling to cope with the rumors and malicious comments, so the company will respond firmly against them.

Despite the lawsuit case, SM Entertainment will still proceed with EXO’s concert as scheduled.On May 16th, a representative from SM Entertainment told Star News, “The concert will be held next week as scheduled and we are doing the best for the concert.”He also added that they couldn’t contact Kris at the moment and the current situation is still unknown (whether Kris will be attending the concert or not).EXO will hold their very first solo concert, ‘EXO FROM. EXOPLANET #1 – THE LOST PLANET -‘, since their debut at Seoul Olympic Gymnasium on May 24th-25th.

SM has confirmed the validity of the lawsuit filed against them and express their understanding of the situation, but continue to urge Kris to cooperate and return for EXO’s upcoming tour of Asia.

Belatedly, Kris were reported to submitted a lawsuit against SM. He asked to nullified his contract on SM, and rumoured to be the same case with what happened to Hangeng and JYJ.

But, both SM and Kris still not speaking to public about the case, beside admitting of the lawsuit were put on Seoul District Court. K-Media speculated this week is going to be a crucial moment for both sides, which decided the future of EXO.

On the morning of May 15, Sina.com reported that “EXO-M’s leader Kris has filed for a termination of his exclusive contract with SM Entertainment.” The article stated that the news had not yet been confirmed, and then listed a few reasons on why Kris might be filing for a nullification of his contract (none of which have been confirmed by Kris or his lawyer thus far).

After that, various Korean news portals announced the same thing, citing Sina as the source of the news. Upon getting in touch with SM Entertainment, it was reported that SM was not even aware of the lawsuit, and that the company had stated that such rumors “are unheard of.”

However, after a few hours, the Seoul District Court confirmed to eNews that they’d received a lawsuit request under Kris’ Chinese name. (The documents pertaining to his lawsuit can be searched on the Court’s website.) They also reported that the Hankyul law firm would be handling the case on behalf of Kris, and that Cho Bum Suk, the same lawyer who represented Hangeng in 2009, would be representing Kris personally. The law firm’s representatives have therefore confirmed that Kris has filed a lawsuit against SM Entertainment for a termination of his contract, and they expressed their wish to handle the case as discreetly as possible, without revealing any details to the media.

In response to the Seoul District Court’s confirmation, SM Entertainment stated that they are “still looking into the facts regarding Kris’ request to terminate his contract,” that “it is a rather bewildering situation,” and that they will do their best to ensure that EXO’s activities go on as planned.

On the May 15 episode of M!Countdown, Osen met up with Suho in EXO-K’s waiting room, where they managed to ask him about his opinion on the dispute. Suho stated that he and the other members had a long conversation regarding the lawsuit and that they do not understand Kris’ actions at all. He also stated that Kris’ behavior is “irresponsible” and that he clearly was not thinking of EXO (when he filed the lawsuit). He added that the rest of the members do not have issues with the company, and that Kris should “cancel the lawsuit immediately and apologize to the company and his fellow members.”

Regarding the rest of the members’ reactions, Tao unfollowed Kris on both his Instagram and Weibo account, while Chanyeol, Lay and Luhan unfollowed Kris on Instagram. Sehun posted a picture of a question mark on his Instagram with the caption “…” while Chanyeol posted a photo of EXO’s logo with the caption “encourage the good, punish the evil.” Tao, however, posted this picture with the following message attached:

He posted the same message on Weibo and stressed that it was indeed he who wrote it:

Off the record: this is all we really know so far. There are still many things left unconfirmed. What we know for sure is that, yes, Kris has filed a lawsuit against SM Entertainment. The reasons behind this remain undisclosed. Do not buy into the rumors and conspiracy theories you find online. Trust that Kris and EXO will be able to pull through this and that everything will turn out well, whatever the outcome may be.

On May 8th, Baidu, iQiYi and S.M. Entertainment Co. jointly held a opening press conference at Beijing. In the press conference, iQiYi and SM Ent. officially signed an collaboration MOU. Through their collaboration, iQiYi gained the exclusive license of managing and releasing its best music videos  from SM Entertainment, jointly developing a entertainment brand with the words “Love Kpop Love iQiYi”. So far, iQiYi is further closer to consolidating the position of the first Korean online video  entertainment platform, and now young Chinese internet users will immediately be get to experience top Korean entertainment content.

Apart from the leaders of the iQiYi and S.M. Entertainment, EXO also attended the press conference. 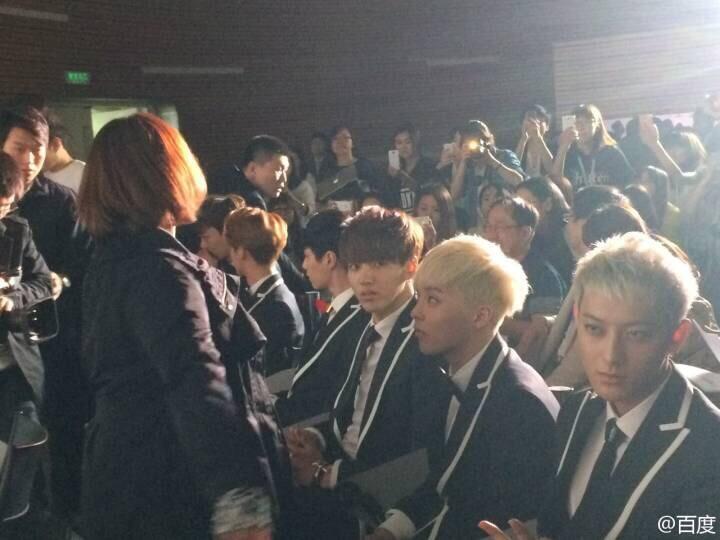 Competition of the goy groups of the ‘Big 3’ is starting again. While SM Entertainment’s ‘hit’ boy group EXO is planning on making a November comeback, YG Entertainment JYP Entertainment are both showing their boy groups one after the other. It calculates YG and JYP are going against the storm of boy groups that SM made with EXO.

t/n: omitted anything that does not have to do with EXO