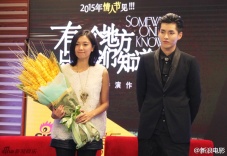 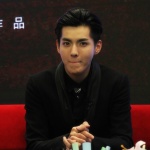 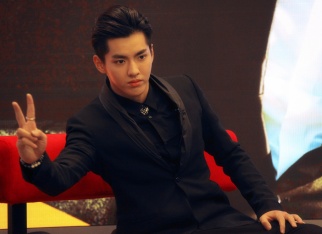 As the cast and crew of Wu Yifan’s acting debut, ‘有一個地方只有我們知道 Somewhere Only We Know’ wraps up filming & movie commences post-production phase, the lead actors and actresses Wu Yifan, Wang Likun, Zhang Chao, Re Yizha – as well as Director Xu Jinglei stood in front of the media to answer all the curiosities about the anticipated Valentines’ treat – during a press conference held at Beijing, September 11.

Held in Beijing, the media and fans alike were welcomed with a sweet-themed venue complete with pianos, post boxes, and everything else reminiscent of the harmonious side of Prague. For a treat, after Director Xu opened the program, Wu Yi Fan, who plays lead character Ze Yang, serenaded the enthusiastic hearts of the audience with his rendition of John Legend’s ‘All Of Me’ – in his trademark English skill. Accompanied by the soulful tones of the piano, everyone was seemingly given a glimpse of the love story Wang’s and Wu’s characters both portrayed in the movie. While Wu sang to the audience, the screen on the stage played scenes everyone can expect – including the romantic interactions between the characters, and music-playing displays. Shortly after, the host inquired about Wu’s musical likes such as songwriting. He then shyly admitted that he himself, might be able to showcase his songwriting skills for the movie.

Following Wu’s stage, all of the members of the cast joined the spotlight to finally entertain several questions that ranged from the outside-the-film moments they shared together, as well as a few clues about how the story flowed. The cast recollected the happy memories they made together when they played pool (billiards) – which allowed Director Xu to throw a playful question which was then answered by Wu. When asked who played pool the best, Wu shyly admitted that it was the ‘beautiful, Director Xu.’ Director Xu, in response, also praised Wu’s pool skills, as well as his endurance to do push-ups. Continuing the playful talk, to test Wu’s Mandarin pronunciations (which was, according to Director Xu, a bit of a problem during the initial filming as Wu stayed in South Korea for quite an amount of time) the host asked the young actor to recite a tongue twister, which earned a laugh from himself and from everyone who listened. It was also revealed that Wu had to undergo a ‘strict diet’ to match Ze Yang’s image – who also, according to himself, was an arrogant, complicated, and introverted character.

Several scenes from the movie, such as a dramatic confrontation between Wang and Wu’s characters, humorous moments, as well as behind-the-scenes captures, were also revealed during the event. To share a bit of information, the cast also revealed that Wu had to do a basketball ‘dunk’ in one scene, which earned the young man praises from everyone who witnessed.

Throughout the press conference, SOWK’s Official Weibo also posted live updates and photos from the event itself. Director Xu, Wu Yifan, and the rest of the cast also entertained interviews from the press people backstage – where Director Xu Jinglei confidently promised that Wu Yifan will become a superstar. Before leaving the stage, Wu was also spotted smiling towards the direction of his fans who diligently attended the event; some even bringing flower wreaths to congratulate him on his first movie. As the excitement never ends, official photos were also shortly released to the public for the fans to enjoy while waiting for more sneak peeks. The press conference lasted for about an hour.

At a place we all know, there is a brilliant female director, who is leading an invincible team, that is building on a new love story. Of course, there is also him who we all we love. See you at #Harper Bazaar October Issue#! @ Somewhere Only We Know
Trans © Icingonyou