EXO and Tang Wei’s photoshoot was a day before the Seoul Music Awards. The shoot had to take place in between rehearsals and during their break times because their schedules were so tight. The staff was in chaos, worried about whether or not the rehearsal would let out on time. However, when it came time for them to show up at the studio, EXO’s Baekhyun, Tao, and Sehun strolled through the door. As soon as they said “Hello!” the worries of the staff melted away. It was finally time to start. With a little over an hour and a half to shoot ten pages of photos, the staff agreed to proceed right away. The movements of the photographer and editor became busy. The lighting was set, the costumes were checked, and minute by minute, Tang Wei and EXO touched us in a way that could not be neglected. “Cut, good! Next cut!” It only took a short while for Photography Jo Seon Hui to give the OK, which was an indication that the cut had been completed well. The joy was short-lived, however, because EXO’s Baekhyun, Tao, and Sehun, as well as Tang Wei, were forced to leave for the awards ceremony rehearsals. Though the briefness of the meeting was regrettable, we all had to say goodbye. A week later, we met again for the cover story and interview. When Tang Wei saw the photos of herself, she said “Oh, the ones with me came out very well!” “Look, it’s me!” she joked. At the year-end 2013 awards, EXO once again proved themselves to be the best K-pop stars. To meet those stars as well as another star, I was excited and nervous. “I really can’t believe I’m meeting such a famous actor, and that you’re here to shoot.”

At the end of the shoot, Baekhyun approached Tang Wei with an expression of excitement. “I really can’t believe it!” Bekhyun said, to which Sehun added, “I’m so honored that I’m shaking!” At that time, Tao and Tang Wei shot a scene so riveting, that it made the staff cheer. “To be honest, I shook a lot in that moment. Before the shoot, I really worried about how well I would do and my self-confidence was not high.”

Whether or not it was due to the similarity in culture, Tang Wei and Tao looked very compatible and naturally conversed in between shoots. “As a matter of fact, even before we came to this shoot, Tao practiced and practiced. He took 1,000 selcas a day,” laughed Baekhyun. “If we have the chance to shoot with Tang Wei again, it would be nice to do it on Jeju Island. It would look good, don’t you think?” Tao said after such a short day of cuts.

“But aren’t Hyung and Tang Wei in a relationship where they can exchange back hugs?” Sehun shuddered (jokingly). “This time, it was only us three, but next time it’ll be all twelve members and I hope to do a nicer shoot,” said Baekhyun warmly. The three members seemed to have positive outlooks and prospects for future projects with The Celebrity team. These are photos that, when remembered, will make them feel good.

As soon as you see the March issue, you might have questions like “Tang Wei and EXO?” “But why just Baekhyun, Tao and Sehun are featured?” is what many readers may wonder. This is the process of the collaboration shoot between Tang Wei and EXO for <The Celebrity>. In an effort to target all Asian audiences, having one of Asia’s greatest celebrity actresses, Tang Wei as the cover model was, of course, our first choice. After many months of sending many ‘love calls’ to her agency and acquaintances to allow her to be featured in this month’s magazine, Tang Wei finally gave an ‘OK!’ to us.

In 2013, the globally acknowledged Korean group EXO emerged from Asia’s music industry, whom <The Celebrity> has been eager to capture stories on. We wanted to feature them in more issues than just the previous two. Though the collaboration with Tang Wei seemed difficult, with global group EXO, this concept for The Celebrity seemed more appealing. Now, we see the best actress and best K-pop stars collaborate and create an even better combination.

The editorial was under its way. We had several discussions in regards to this project with EXO’s management company and after some struggles, we managed to gain a pleasant reply from EXO. But that was not the end. Due to the organization and planning of Tang Wei’s 24-hours-a-day schedules and overseas commute, the work to match both Tang Wei and EXO’s busy schedules was not easy. More than one hundred e-mails and a dozen calls were exchanged per day. Then came the issue of which of the twelve members would be paired with Tang Wei and featured in this month’s issue. First, the members’ schedules were compared in order to see which matched Tang Wei’s. Second, which member looked best when standing next to Tang Wei? Keeping those factors in mind, as well as the issue of communication, the best candidates seemed to be EXO-M’s Tao, who secured his spot from the beginning, as he is able to communicate well with Tang Wei. EXO-K’s Sehun who looked like he could, together with Tao, stood next to Tang Wei confidently. Also because EXO-K’s Baekhyun has the persona of an actor,was finally added to the group. (It was later known that Tang Wei’s favorite Korean group is EXO).

Right until the day of shooting, the editorial team worked busily day and night. Then, it was finally the day of the shoot. As Tang Wei and EXO’s Baekhyun, Tao, and Sehun stood before the camera, the staff’s urge to applaud was just too great.

(to be continued.)+ EXO & Tang Wei’s cover story will be broken up into three parts. More will be featured in the March issue of . Please look forward. 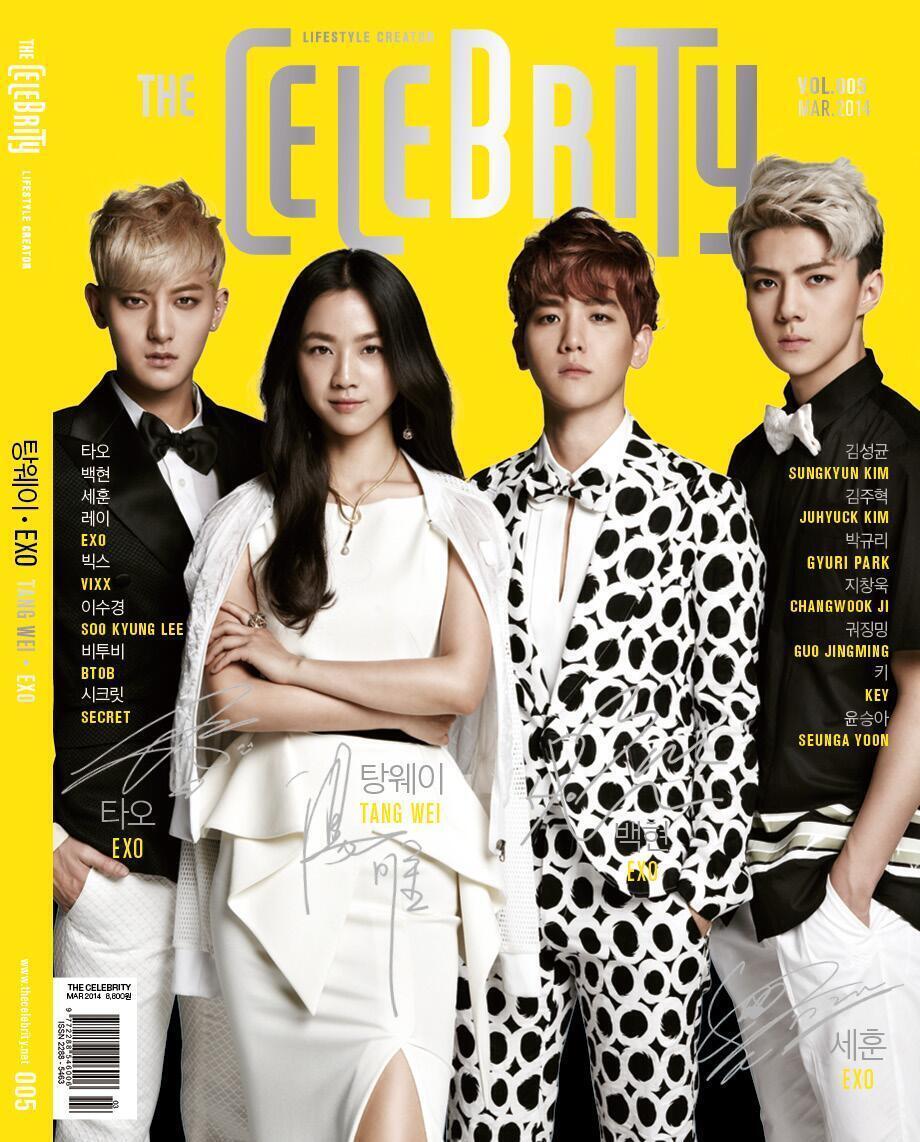 They will have 28 pages for their cover story.
Also six pages with Yixing: EXO Lay – The best dancer who’s immersed in making music
credits 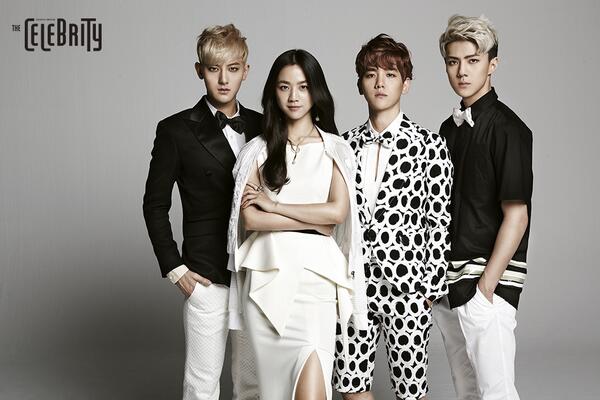